Our ExpressVPN review reveals it’s one of the most popular VPN services around, but so many reviews of it seem just too positive.

Even its website claims it to be the “#1 Trusted leader in VPN” which is too big of a statement to go unchecked.

We’d be fools to take a company at its word, so we put it through our own rigorous, independent VPN testing process to find out whether the hype is real.

This ExpressVPN review sets out to find the real answers to questions from our readers like:

We tested ExpressVPN extensively, trying out all of its VPN apps and making sure we didn’t miss a thing.

Curious to know what we discovered?

Read on to find out, starting with the most important takeaways from our tests.

That’s just a few highlights of what’s to come.

First off, let us find out more about ExpressVPN – plus a complete examination of its VPN logging policy.

ExpressVPN was founded in 2009 and is operated by Express VPN International Ltd., which is based in the British Virgin Islands and far outside of the intrusive 14-eyes surveillance alliance.

That’s an excellent choice of location for a privacy-minded VPN company, as the British Virgin Islands has full sovereignty over its own data regulations.

Foreign governments can still make demands for information, but ExpressVPN makes it clear that it will never share data with them and, crucially, that it doesn’t have any personally identifiable information to share in the first place.

That’s it. ExpressVPN maintains that this is the minimum amount of information required to be collected in order to keep the performance of its servers as strong as possible.

We spoke to Harold Li VP of ExpressVPN about the VPN’s data retention policy and this is what he told us:

“. . . we do not have a publicly stated data retention period for these types of data . . . duration of retention varies based on the type of data . . . we never collect nor retain any data that could link an individual customer with specific activity on the VPN network. Customers can also request for their data to be deleted at any time, in line with their rights under the GDPR.”

While it’s disappointing not to know exactly how long this data is retained, the most important thing of all is that it cannot be used to identify you, or what you do online.

All that’s possible to reveal is that you have used ExpressVPN’s service at some point. This is totally anonymous and about as close to zero-logs as you can get.

A 2018 report by the Center for Democracy and Technology (CDT) questioned ExpressVPN in greater detail and concluded that its servers were both “extremely difficult to compromise” and “limited in the amount of data that could be revealed” in the event that they were.

ExpressVPN’s logging policy was put to the test in December 2017 when one of ExpressVPN’s Turkish VPN servers was seized and inspected by Turkish authorities investigating the assassination of the Russian ambassador to Turkey, Andrei Karlov. The investigators couldn’t find any customer connection logs.

One of the fastest VPNs we’ve tested

ExpressVPN is one of the fastest VPN services we’ve tested – it’s extremely quick and responsive.

It’s also remarkably reliable and consistent, whether you’re connecting to a nearby server or one on the other side of the world.

Its speed is also very impressive in high censorship countries like China, where most other VPN services struggle to even connect.

When connected to ExpressVPN:

On top of fast download and upload speeds, ExpressVPN’s low latency and low ping times make it a good VPN for gaming, not as good as other VPN services but a strong gaming contender nonetheless.

From our testing lab in the UK, we measured ExpressVPN’s average speeds connecting out to various locations worldwide. These were the results:

The numbers speak for themselves: ExpressVPN is by far the fastest VPN on long-distance connections, something most VPN services struggle with.

To get the fastest speeds, and you’re happily connecting to a nearby server, you can also use the Smart Location feature.

It’s a clever tool that picks a close-by server optimised for high speed and low latency. 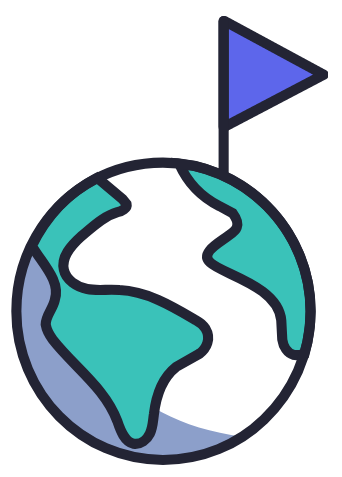 ExpressVPN operates more than 3,000 VPN servers across the world, spread evenly over every continent (excluding Antarctica).

Basically, no matter where you’re located you should have no trouble finding a VPN server near you. 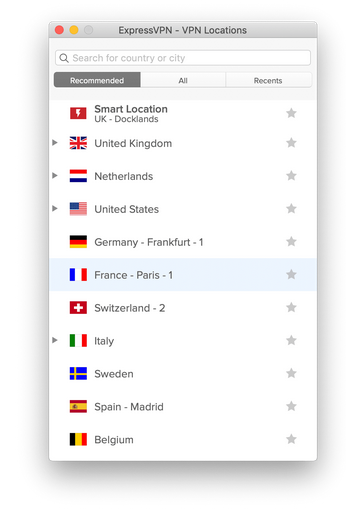 3,000 servers are one of the widest ranges of servers we’ve seen from any VPN service and the ExpressVPN website even lists which VPN security protocols are available in each location (either country or city).

You can access specific city-level servers in a number of locations, too:

ExpressVPN’s 20 different city-level locations in the US and four in Australia are some of the highest we’ve seen.

ExpressVPN easily unlocks US Netflix through almost all of its US-based VPN servers (apart from New York).

ExpressVPN doesn’t have servers dedicated to streaming as CyberGhost does, but this isn’t much of an issue since most ExpressVPN servers work with streaming sites.

The Isle of Man and Jersey servers still work well with UK Netflix, while most UK servers unlock BBC iPlayer (although customer support informed us it will only work if you’re located outside of the UK).

Unsurprisingly, ExpressVPN also stands out at torrenting and downloading files.

It allows any type of P2P traffic across all its servers, resulting in less server congestion and ultimately faster download and upload speeds. That’s exactly what we saw in our tests.

Privacy and security-wise, ExpressVPN’s kill switch – which they’ve named Network Lock – works extremely well (should your VPN connection drop at any point) and when we tested for IP or DNS leaks, we found zero.

And, ExpressVPN doesn’t keep any user activity logs so your privacy and identity is safe

ExpressVPN works in China, bypassing Chinese censorship with ease, largely thanks to the company devoting significant resources into outsmarting the censors.  That’s why it’s our highest-rated VPN for China.

If you have protocol selection switched to Automatic, ExpressVPN review proprietary obfuscation security protocols are activated, which are very effective in beating aggressive state-level censors.

These obfuscation protocols ensure that its VPN apps easily beat even the most aggressive of blocks in countries like Turkey, Saudi Arabia and Iran.

ExpressVPN recommends specific servers for users in China – just get in touch with customer support (available 24/7) for updated information.

VPN apps for all popular devices

ExpressVPN supports just about any operating system or device out there:

On ExpressVPN review website, you’ll find setup instructions for the above platforms as well as workarounds for devices where a custom VPN app isn’t available.

For less common devices, ExpressVPN may not have a native dedicated VPN app, but on their website, you’ll find a walkthrough on their website to show you how to set up a workaround for your device.

Remember, you can use ExpressVPN on five different devices simultaneously. However, if you need more to use it on more devices at the same time, you’ll have to set the VPN on your home router.

In fact, you use ExpressVPN’s router app to enjoy unlimited simultaneous connections and use the VPN on as many devices as you want.

The ExpressVPN app is compatible with the following routers:

But, you can also manually set up the VPN on these router manufacturers:

ExpressVPN is our favorite VPN for other streaming devices as well as gaming consoles like Xbox and PlayStation.

In fact, you can use the MediaStreamer feature (included in every subscription plan), which makes it very easy to unblock web services with a whole range of devices.

MediaStreamer doesn’t encrypt your traffic, though.

If you want to secure all (or most) connections in your home, you should instead install ExpressVPN on your router (see above).

Don’t want to set up ExpressVPN on your router?

You can always connect the new device to a device where the VPN is already running (for example, your PC or your Mac). 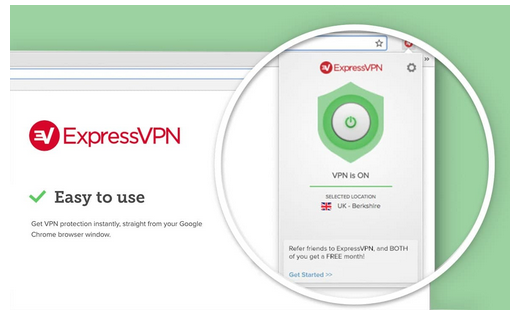 Most of the VPN browser add-ons we see are proxies and not full VPNs, but ExpressVPN’s extensions are the real deal. However, they are extensions of the ExpressVPN app so the desktop application will need to be running at the same time.

Some of our readers ask us: “why to use the extensions when the VPN app is already running?”

The answer is simple: the VPN extension allows you to control the VPN app from your browser. You can easily switch between server locations without having to do so from the desktop VPN client.

Additionally, ExpressVPN’s extensions all use HTTPS Everywhere – a collaboration between The TOR Project and the Electronic Frontier Foundation – which encrypts communications and requests with websites that still use HTTP (unencrypted).

ExpressVPN is a legitimate and extremely secure VPN service. It uses a multitude of security standards and VPN protocols to keep your browsing data private and secure.

By default, the VPN protocol selection is set to ‘Automatic,’ which we recommend you leave as is. The ExpressVPN review app will determine what is the best security protocol to use – a great feature that very few VPN services have. 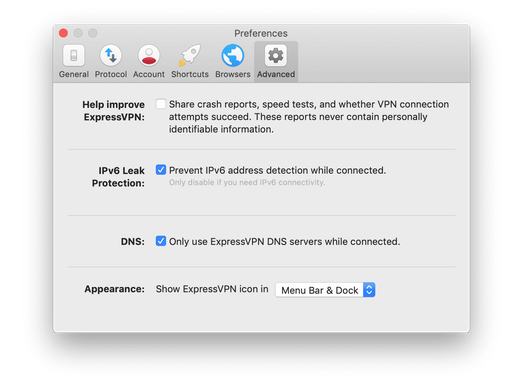 In combination with a 4096-bit RSA key and SHA-512 HMAC authentication, ExpressVPN will keep you protected online.

OpenVPN is currently the best security protocol, although from the VPN app you can choose other protocols – we don’t think you’ll need to, though.

By default, ExpressVPN also uses Perfect Forward Secrecy, which is very simple terms means that even if someone was able to intercept your VPN connection, they still wouldn’t be able to decrypt any of the traffic.

ExpressVPN also has the always-essential VPN kill switch, which it calls Network Lock.

This feature stops your internet connection altogether in the unlikely event your VPN connection drops.

In so doing, your true IP address is never exposed.

However, this feature isn’t included in the iOS app – it’s only available on the Windows, Mac, Android (called Network Protection) and Linux apps.

Talking about IP addresses, our leak testing did not detect any IP or DNS leaks so you can count on ExpressVPN to successfully hide your real IP address.

Split tunnelling is yet another powerful feature that’s not commonly found in other VPNs.

This feature lets you select the apps or devices to put through the VPN connection, and the ones you may want to use your standard internet connection for, like your printer for example.

It doesn’t stop here, though.

ExpressVPN launched its TrustedServer feature, a proprietary technology that removes the need for local storage such as hard disks or solid-state drives.

If you’re a Tor user, ExpressVPN review also has its own website on the Tor network. However, make note that ExpressVPN only supports Tor over VPN.

We could go on but it’s clear that ExpressVPN review is leading the pack when it comes to your security and privacy.

And the fact that ExpressVPN review has passed several security audits in 2018 and in 2019 without a hitch is further evidence of how secure it is.